Find out more about your sign and current influences in your life by checking your current planetary transits with interpretations for each sign.

PISCES
The Fish…February 19 to March 20

Pisces you are the mystic of the Water signs, sometimes even a mystery to yourself – the frequently changing ‘mutable’ Water sign. The Water element means you are a feeling type, motivated by strong emotions, visionary impulses and feeling attachments.

As the ‘mutable’ Water sign, you flow from feeling to feeling, plan to plan, vision to vision. This makes you highly creative or gifted at working with other people and sometimes just predictably unpredictable. You are the sign most likely to motivate yourself to do something by saying you will never do it again. You are also very skilled in a helping capacity, naturally comfortable with service. Yet you easily evoke the help of others by readily expressing vulnerability. You are most happy when you can follow your dreams, while intimately linking with other people’s dreams. As the dreamer your key phrase is: “I imagine”.

A rich imagination and an impulse to merge with others are the way your Water flows. A caring sensitive nature, with the ability to ‘tune-in’ to others, ancient Arabic Astrology describes you thus: “Pisces are of cold and humid nature (aqueous). Their angel rules…luminous bodies and the tenebrous bodies and in particular it holds the keys to the creation of animals”. (Mystical Astrology According to Ibn ‘Arabi). Indeed just as animals pick up changes in the weather before humans, so Pisces tends to pick up changes in the emotional atmosphere before most other signs. You are the ‘night sign’ of planet Jupiter, expressing Jupiter’s wisdom quest in a more private introverted way than Jupiter’s other sign – Sagittarius. Faith, hope and optimism are some of the gifts Jupiter endows. In the body Pisces rules the feet, the lymphatic and glandular systems and the synovial fluids.

The mythic tales of your two rulers – Jupiter and Neptune, give extra insight into your journey as a Pisces. Jupiter/Zeus was to be swallowed by father Saturn upon birth, just like his siblings but his mother achieved a subterfuge and gave Saturn a stone to swallow instead. She took him to a shepherd and his wife to raise. He lived there in secret, then returned full grown and overthrew Saturn, just as had been foretold. This accomplished, he forced Saturn to regurgitate his siblings and one of these was Neptune. Wisely, Jupiter gave his siblings different domains to rule and Neptune/Poseidon became the god of the most mysterious realm of all – the oceans and all that lies deep within them. Most Pisces crave their secrets, often having a secret life or a double life. One life feeds the soul needs, one the worldly needs. Whether the ‘secret time’ takes the form of a spiritual practice, a love of reading fiction, some version of a ‘quiet drink’ each day, or artistic solitude, depends on the individual Pisces. Sometimes your Pisces soul craves drama and achieves it via a clandestine affair or a fated but flawed partnership. Mythic Jupiter was tied eternally to his wife, the very jealous Hera but repeatedly had secret affairs. The most receptive of the signs and often wildly sociable, Pisces is happiest when all the worldly activities are complimented by secrets and solitude. Neptune endows an other-worldly quality that must be somehow integrated for Pisces to feel whole.

With Jupiter representing the quest for adventure and wisdom and Neptune the search for transcendence, their special message to Pisces is to follow your dreams with your feet on the ground.

You can find out more about the current planetary influences specific to your sign if you check the Current Planetary Transits Astrological Interpretations.

Get your hot pisces T 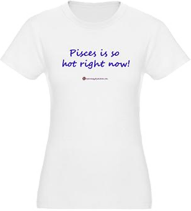